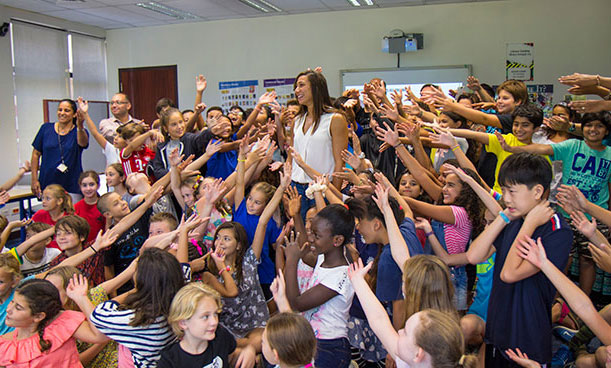 On the last day of Spirit Week, September 14, CAC alumna and Olympics Champion Farida Osman ‘13 came back to CAC to share her journey and inspire students of all ages. Farida not only gave inspirational talks during her visit, but also jumped in the pool with our elementary school children to give them a tip or two on swimming. During Farida’s visit she became a judge in our panel during our final spirit week performances. We helped Advika Mehri, our rising High School student (and Scribe paper writer) to get a one on one exclusive interview with Farida while she was at CAC. We hope you enjoy Advika’s interview (see below) and thank Farida for taking the time to visit and inspire us all with her journey and genuine leadership qualities. She has truly made us proud. Remember to root for Farida in the upcoming 2020 Olympic games as she competes for Egypt in Japan. Go Farida Go! 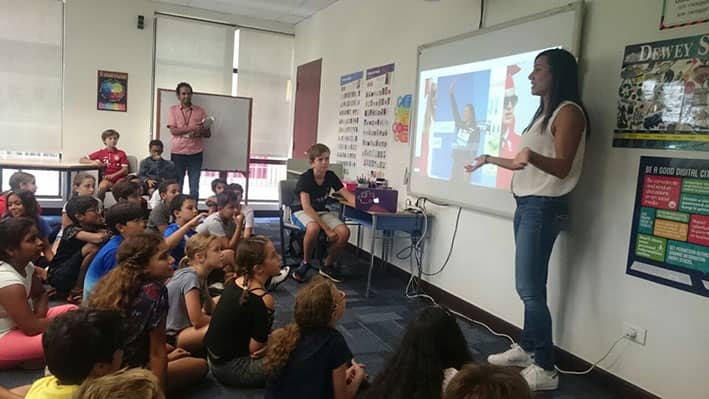 Farida Osman is an Egyptian competitive swimmer, All-Africa Games gold-medalist, Egyptian national champion and record holder, two-time Olympian, and the fastest female swimmer in Egypt and Africa. She was born in Indianapolis, Indiana, in the United States, and moved to Cairo in tenth grade. She graduated from CAC in 2013 and recently graduated from the University of California, Berkeley, with a degree in marketing. On September 14th, she visited CAC to give talks to the elementary, middle, and high schoolers, and held a workshop at the pool. Farida was also kind enough to participate in an interview in which she discussed her time at CAC, what she’s learned from her experiences, and how it felt returning to the school.

Q: When did you first start swimming at CAC?
A: I first began swimming when I was four years old, but it was just to learn the sport as a life skill; I had no idea I would grow to be so passionate about it. I began swimming at CAC in my senior year of high school, and it was the encouragement of my coaches that made me believe I could do great things with the sport.

Q: While you were a swimmer at CAC, what were some of the the best parts about swimming at this school?
A: The best part of swimming at CAC for me was the team spirit that came with it. The swim team is a family and the encouragement and support that everyone brings is unmatchable. Being able to compete and want to succeed for a team, rather than just for yourself, gave me the motivation to work harder, and made being a swimmer at CAC a lot more special.

Q: Who would you say supported you most with your aspirations in terms of swimming?
A: It was the superintendent of the time that really pushed me to dream big in terms of my swimming, as he was supportive of me, and gave me the amazing opportunity to swim at CAC.

Q: When you first became completely sure that swimming was something you wanted to pursue, and something that means so much to you, what were you most afraid of?
A: I was more excited than afraid about the prospect of pursuing swimming because the idea of competition has always been an incentive for me to try something new, rather than something to hold me back. I undoubtedly felt nervous about my future but diving head first into such a great challenge was more exciting than scary for me. 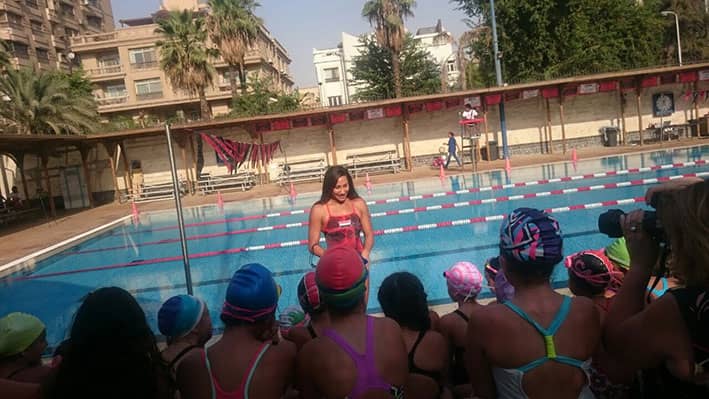 Q: How does it feel being able to represent Egypt in such an inspiring way in sports events all around the world?
A: It’s a great honour to be able to represent my country in tournaments everywhere. What makes this honour even more special for me is that by being a part of something so inspiring, I can, in turn, motivate so many more young swimmers to follow their dreams. Also, since swimming isn’t as popular a sport as others, I get to spread it and all the joy and passion it can bring to people all around the world by representing Egypt in various events.

Q: You just graduated from the University of California, Berkeley, with a degree in marketing. While you were at CAC, you obviously had an academic career to keep up, so how were you able to manage your time between studying and swimming?
A: It was much harder to balance work and swimming at CAC than it was at Berkeley. My days at CAC were extremely long, with school from 8:00 am - 3:00 pm, then swimming practice, which was an hour or more away from school, and then returning home at around 9:00 pm. It was entirely my responsibility to manage my time and establish my priorities, which put a lot of extra pressure on me to keep up both my swimming and my studies. At university, however, since everything revolved around swimming, there were so many more resources available to me that helped me balance both aspects of my life. In terms of whether or not I was hesitant about going to the U.S. for college and pursuing swimming, I was a little worried, but I wasn’t hesitant because I had always been sure of going to the U.S. for university, and I was sure the system at Berkeley would allow for a balance between my two interests.

Q: What would you say is the main thing you’ve learned out of everything you’ve experienced so far?
A: The most important thing I’ve learned throughout my journey has been to be comfortable with the uncomfortable. While being coached to become a better swimmer, I have been pushed to my greatest limits, limits I never thought I’d reach. My coaches made me work harder than I ever thought I could, and although this was hard, it was worth it, because I’m now aware of how much I am truly capable of and what determination and willpower can accomplish.

Q: What’s one thing that you know now, or you learned specifically because of your time at CAC?
A: CAC pushes you to work towards your dream, no matter how difficult it may seem, and instills in you a drive that is necessary to reach that dream. CAC teaches you how to set a goal, be focused on that goal, and work as hard as you can to get where you want to be in life. I think that CAC shows students and athletes alike how to be independent and determined in your ambitions, and that you are the only person who can help you make these ambitions a reality.

Q: Do you have any one piece of advice you’d like to share with anyone who would like to pursue swimming, sports, or any other ambition?
A: I think the most important piece of advice everyone should hear is that everyone has their own path in life, and it’s up to each individual to form and follow this path. The road is hard, and the journey includes sacrifices and struggle, but the result is definitely worth it.

Q: Finally, how did it feel returning to CAC?
A: I was more than happy when I visited CAC. I spoke with people I used to know, met new faces, and interacted with up and coming swimmers. I felt a strong sense of pride witnessing first hand the development of not only the school’s swimming program, but the people and faculty here. I feel so proud of the place that played such a large role in developing my personality and skills. I was also excited about being able to talk about my experiences and share everything I’ve learned over the years.

LETTER FROM THE HEAD OF SCHOOL

Dear Eagles Around the World! Welcome to the Spring '18 Alumni Newsletter and thank you for taking the time to catch up on 'what's going on in Maadi'.  CAC has had a busy year with several notable accomplishments. As always, learning is our focus and we continue to strive to provide students with an excellent learning environment, challenging curriculum, and opportunities for enrichment. This includes our robust field trip program for ES students via the Egypt Culture program. ES classes recently visited The Egyptian Museum and Mohamed Ali Mosque. CAC has added a Challenge and Enrichment Coordinator this year, and her role... 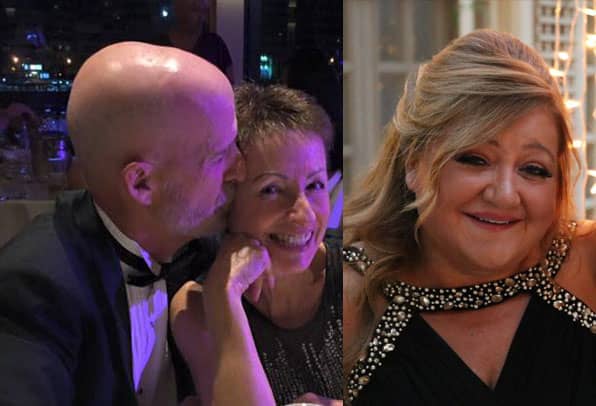 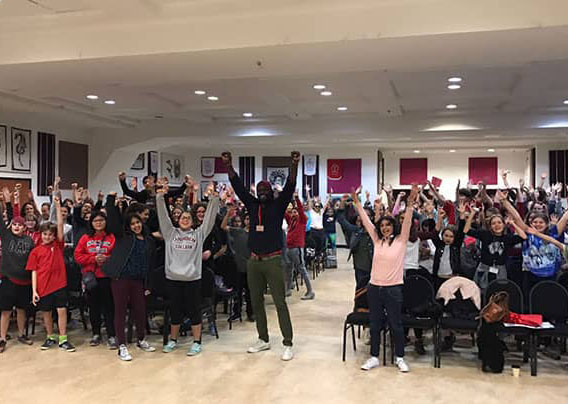 "Walking was the metaphor of how far you can go""In Africa, nobody stands alone, a community will help you""This journey taught me Empathy, Humanity and sharing" The Alumni and Community Engagement... 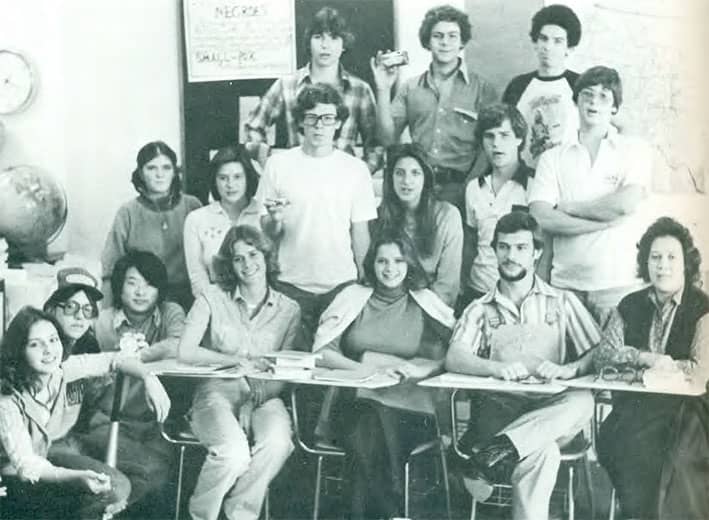 Dear Alumni, In the late 1970s, Mrs. Barbara Johnson, teacher of International Relations at CAC, began taking her class on an annual trip to the Hague International Model United Nations... 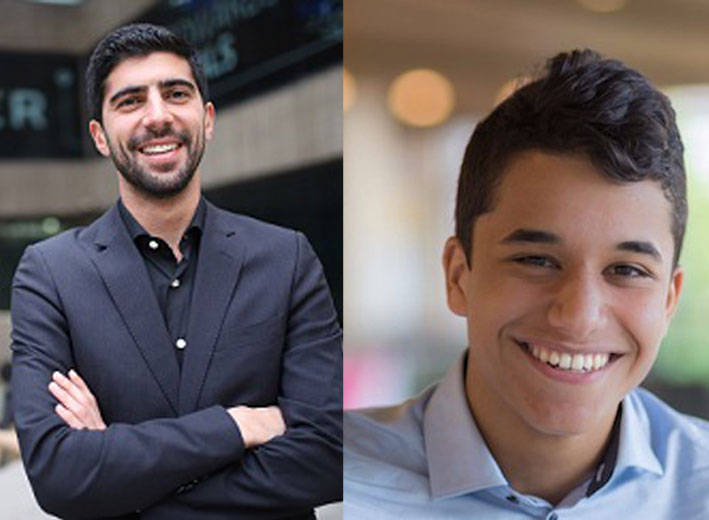 Our most recent alumnus, Marwan Refaat ’18 graduated early in December and is a name that we believe we'll be hearing about in the years to come. During his time...

ALUMNI AND WEEK WITHOUT WALLS 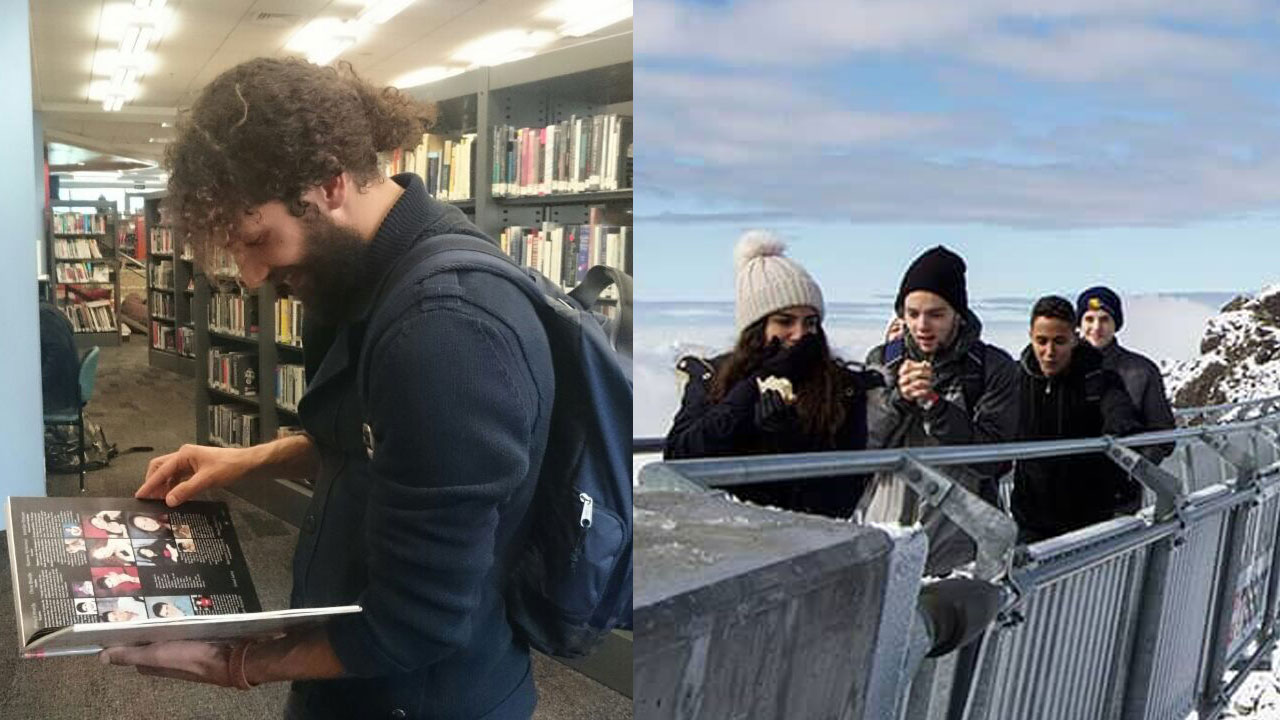 Our alumnus Hassan Sadek ’01 is organizing a 2018-2019 Week Without Walls trip with CAC and will be travelling with our students too! If you are an alumnus interested in planning...

On the last day of Spirit Week, September 14, CAC alumna and Olympics Champion Farida Osman ‘13 came back to CAC to share her journey and inspire students of all... 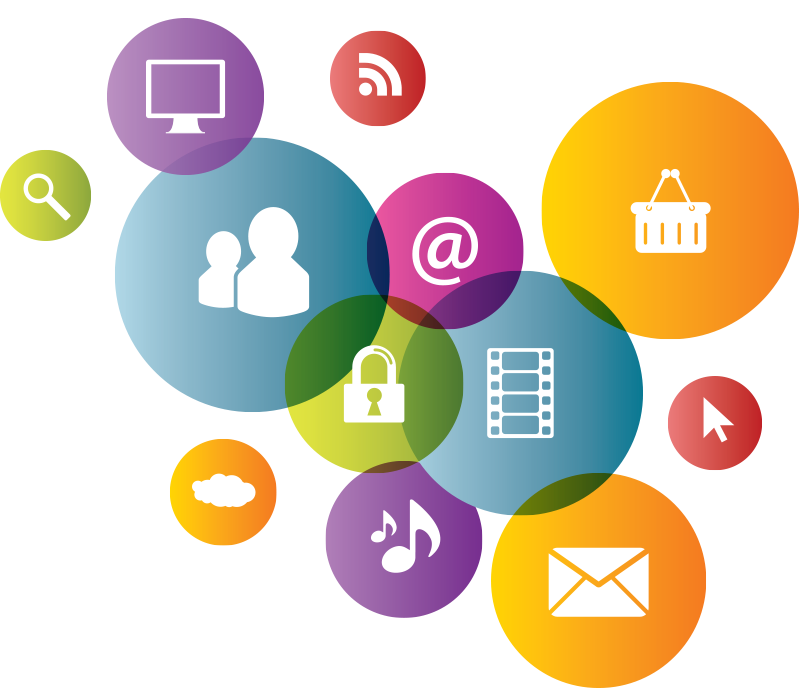 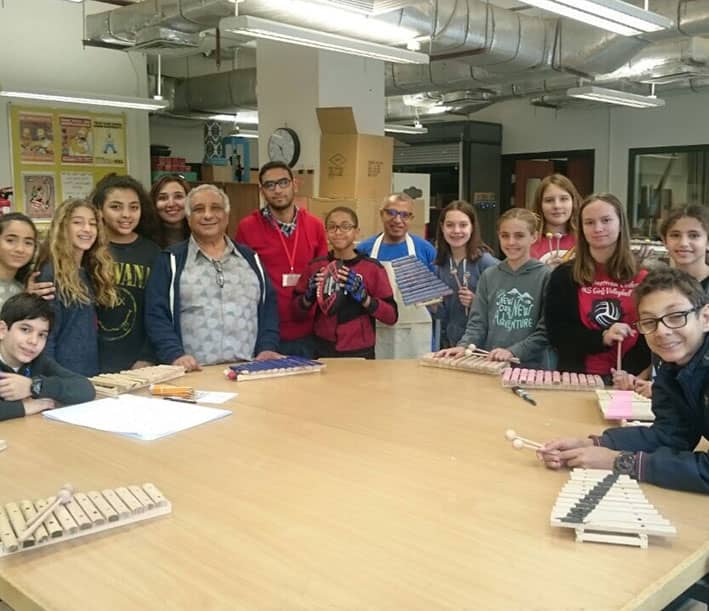 You may have noticed a beautiful mosaic in our CAC Theatre foyer. This masterpiece was a donation to CAC by Mr. Elhamy Naguib to honor his late wife and previous...

ISTA THEATER FESTIVAL IS BACK AT CAC 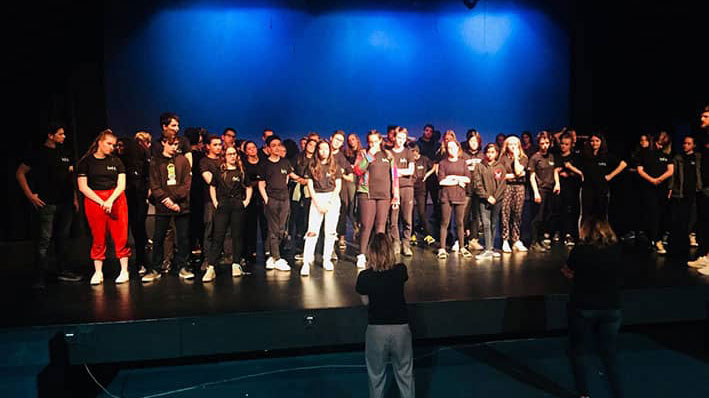 As one of the founding schools of The International Schools Theatre Association (ISTA), CAC hosted the ISTA HS Festival for the first time this year since 2008. ISTA believes that... 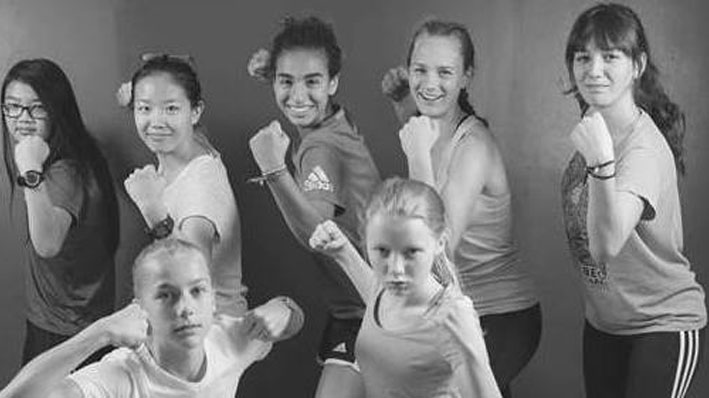 Adolescence is a critical time period for developing healthy habits. Despite overwhelming research that highlights the importance of physical activity for girls, girls all over the world significantly decrease their...

WHERE ARE OUR EAGLES SOARING?: CAC SENIO… 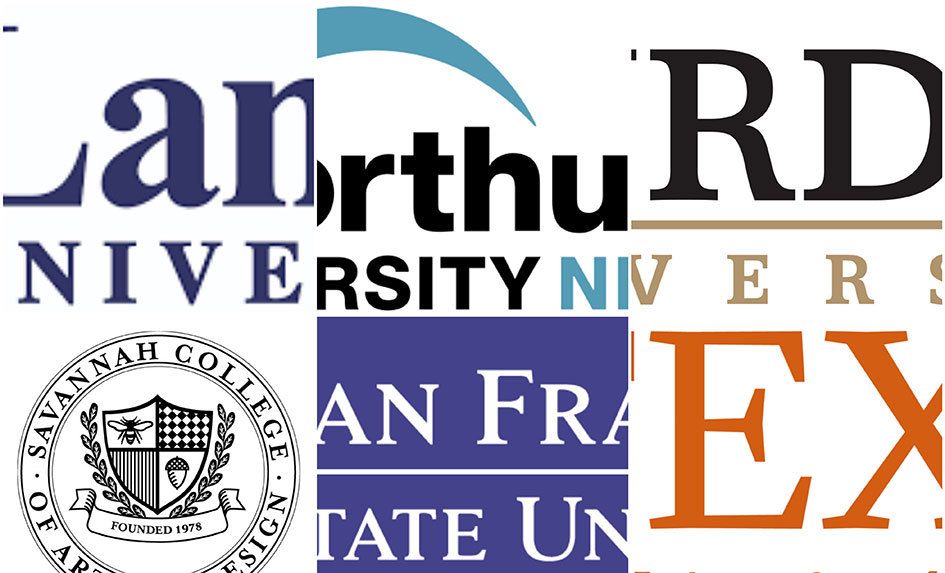 Our eagles are soaring off to amazing universities around the world again this year!  (See some of the universities below)A very impressive statistic we discovered about CAC college scholarship data... 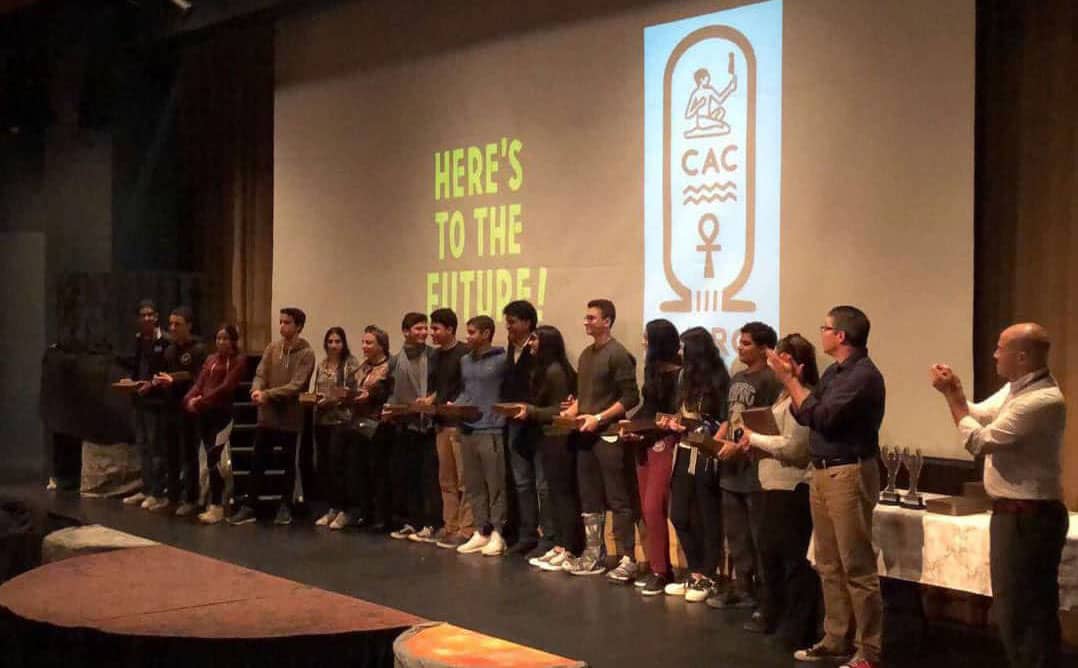 On December 14, 2017, in the CAC theatre, we celebrated CAC winning the INJAZ Al-Arab Regional Competition for Young Entrepreneurs. Injaz is a youth centered, non-profit organization that aims to... 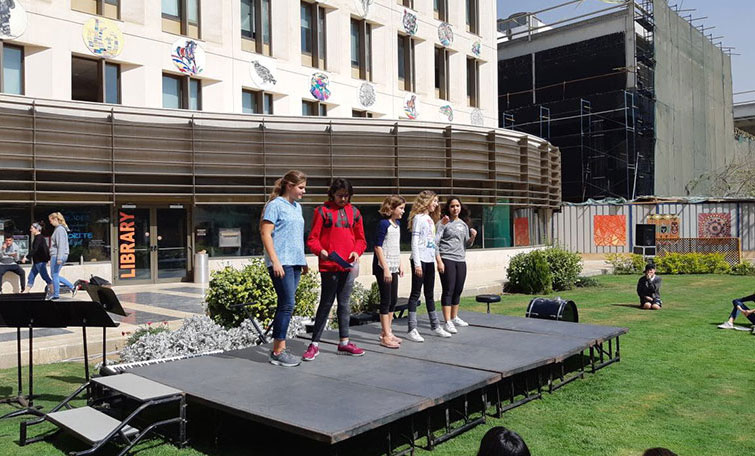 On February 22, the Middle School World Language Department celebrated Mother Language Day with our students. This day is celebrated internationally to showcase the importance of culture and diversity. We...

ALUMNA MEDICAL AUTHOR AND ILLUSTRATOR DO… 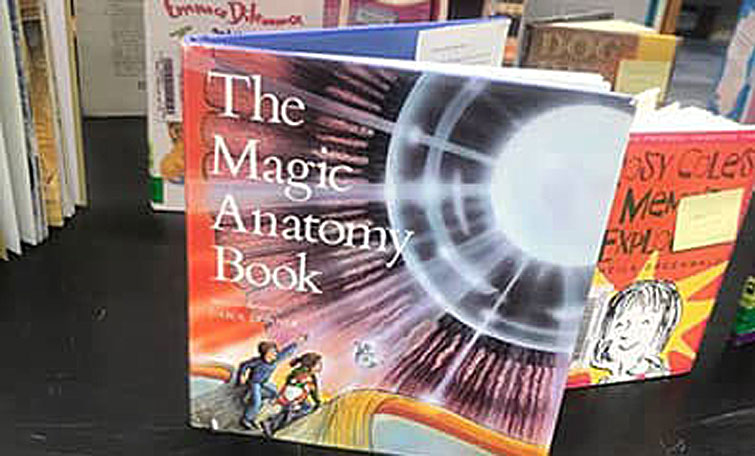 Former CAC student Carol Donner (Mussetter)’54 generously sent us her fascinating book, “The Magic Anatomy Book” to be shared and enjoyed by our young readers in CAC’s Elementary Library. The... 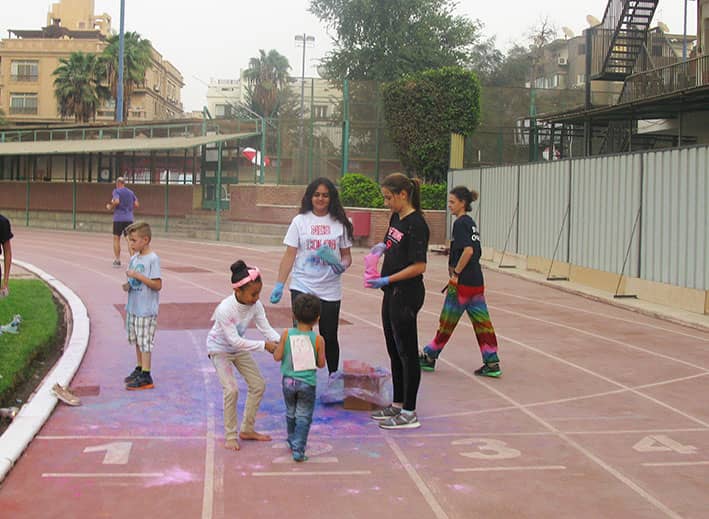 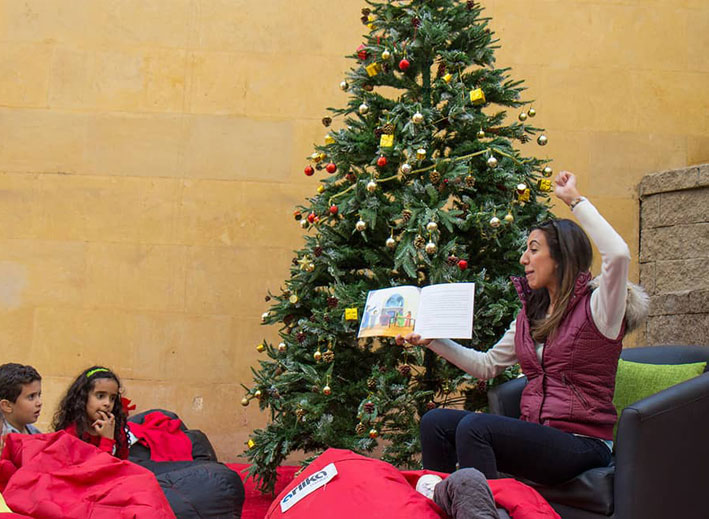 Our talented alumna Dina Elabd’08 participated in this years Book Fair at CAC. Dina excitingly read to our students her latest story book “The Magic Palm” and later gave us... 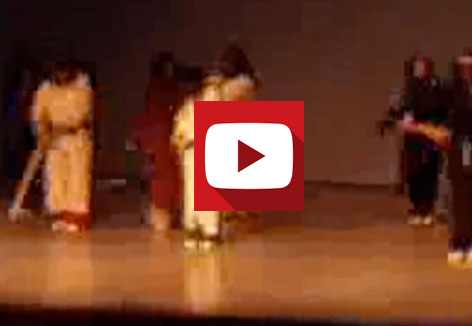 Do you remember this? If you do, send us your memories. If you have videos you'd like to share from back in the day, share them with us here.

THE SCRIBE PAPER IS BACK! 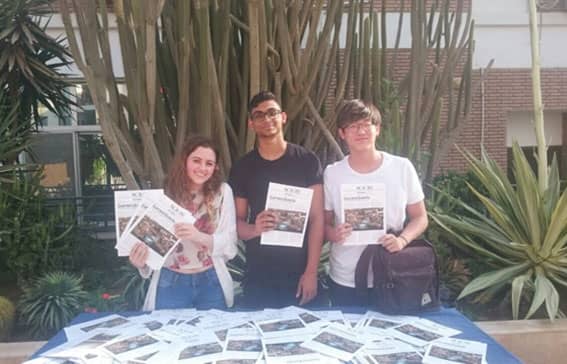 Remember The Scribe Newspaper at CAC? Well, we've brought it back this year! The Alumni... 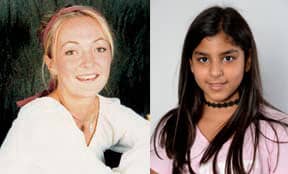 Kira Goodwin’03: It is with a heavy heart that we share news of the loss... 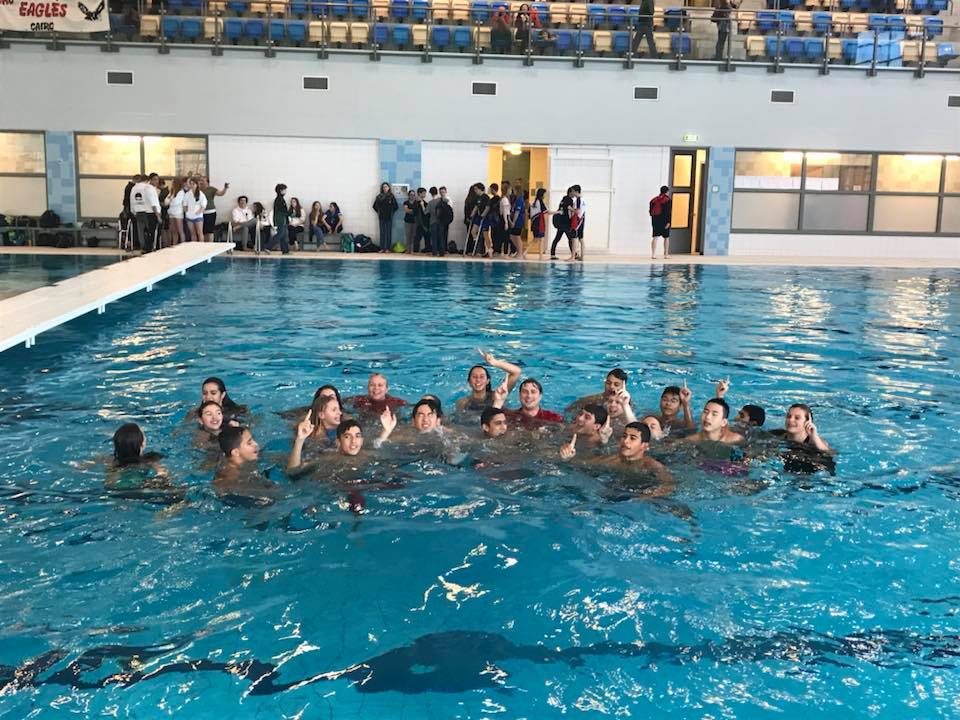 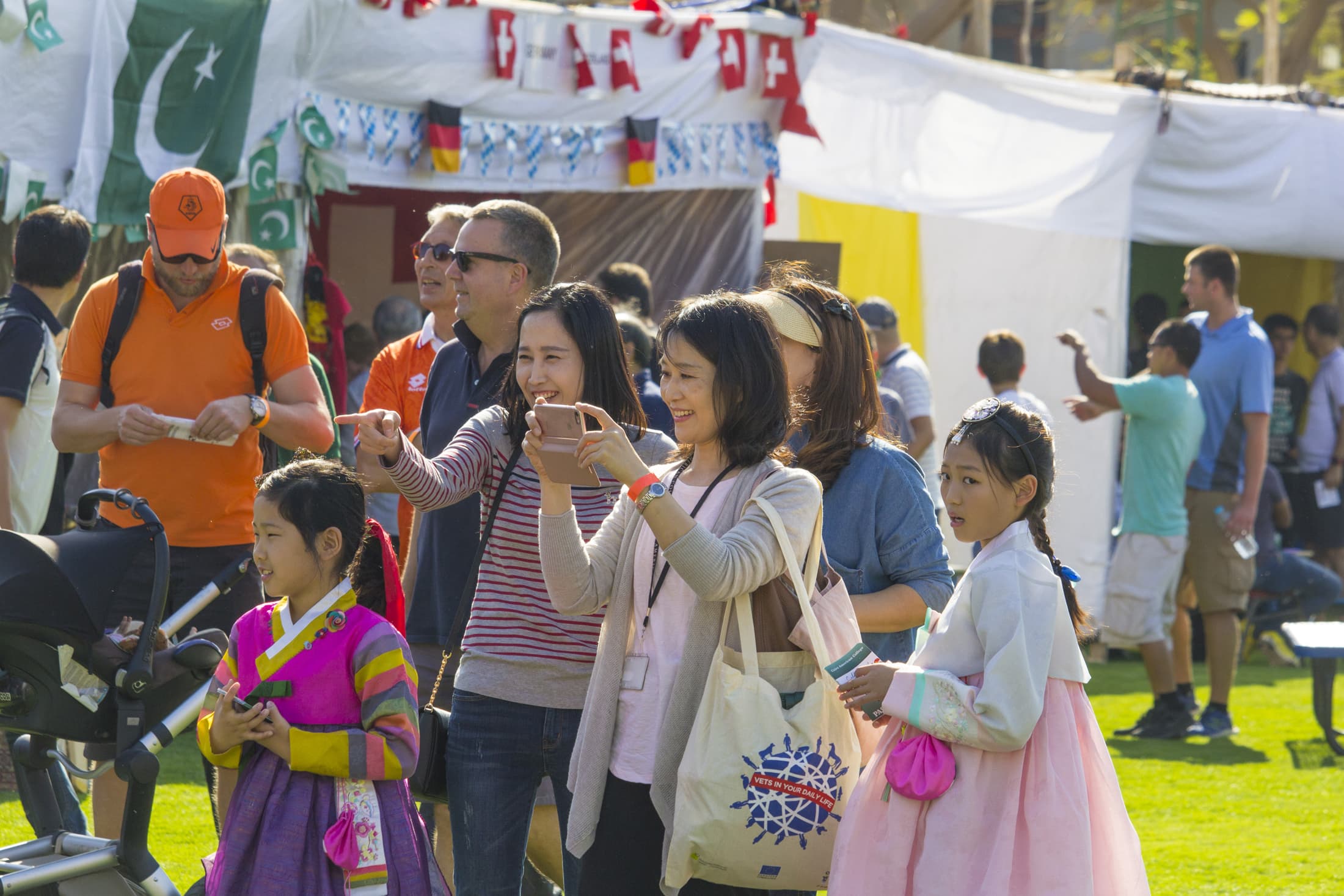 Continuing a yearly school tradition to celebrate the amazing diversity at CAC, in March we... 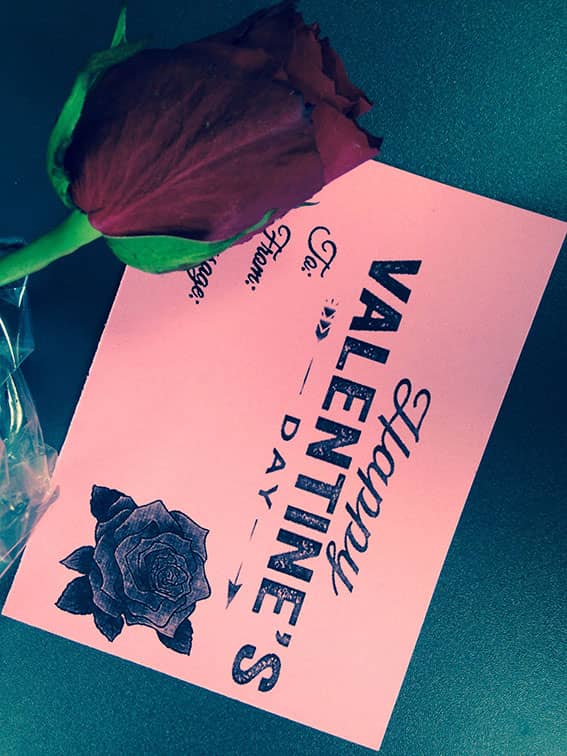 On Valentine’s Day, our students delivered Flower-grams at CAC to friends, teachers, and siblings to...

Sent by our alumna Amina Archer:“Fellow alumni, one of our own is in need of...

To further instil one of our CAC Core Values, compassion, CAC students are entering an... 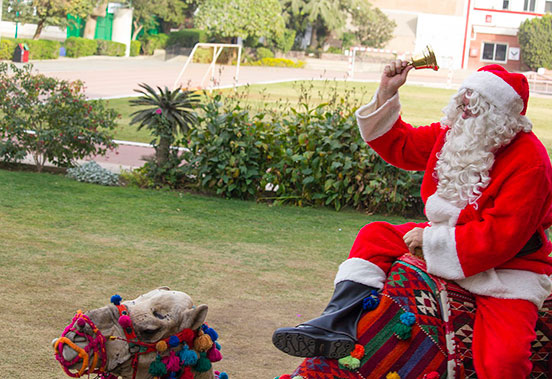 Our wonderful Elementary teacher Monte Davis dressed as Santa and riding a camel to celebrate the holiday season at CAC with students and community. 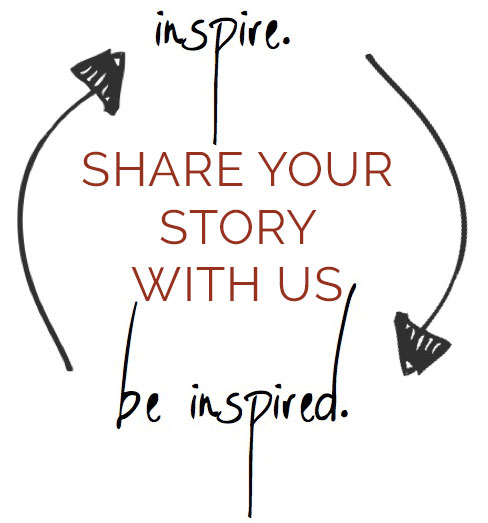 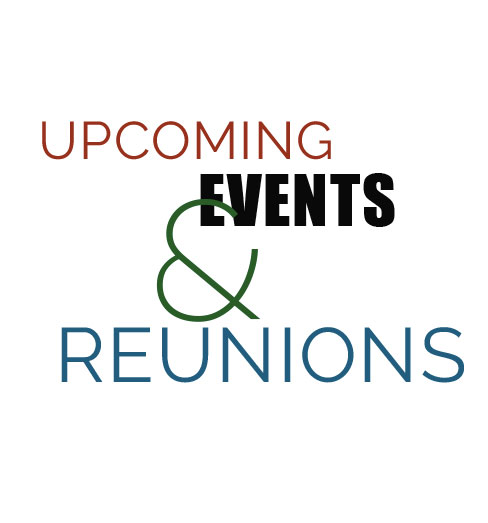 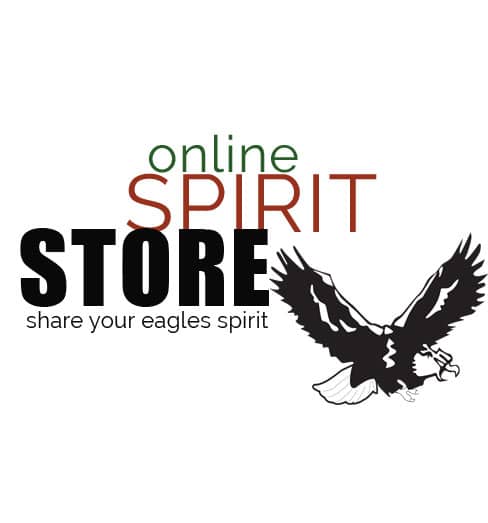